I’m the kind of person who likes to move around between hotels, hostels, and Airbnb houses while traveling. I can only have two nights of my trip and still book different places for each night. Well it has its ups and downs moments for sure. The ups would be something like a damn good bed, very friendly staff, super clean room/house, great breakfast, etc. The down would be a really bad service and untreated places.

On my last trip to Yogyakarta, I went on another place-hoping. I had 4 nights to spend there, and booked 3 different places 😛 . I decided to stay on a hostel near the station I arrived at for one night, then moved to a boutique hotel that was quite recommended by my friends for two nights, and for my last night I decided to stay in one of the local’s house through Airbnb. I shared a bit about the hostel and the boutique hotel in my previous post about Yogyakarta.

Then what about the house?

I chose this one over other places because it’s not like a typical modern house or inn (that, and it’s on the top of the list when I searched online 😀 ) and it’s also a love at first sight when I saw the pictures on its page. It’s colorful and seems like an old Indonesian house that was preserved really well. I have a thing for vintage houses like this one.

So on the fourth day in Yogyakarta, I went to Benetta House with the direction I received from the host. It’s not in a big road but you kind of have to walk a bit into an alley, but the direction was so on point that I had no problem at all finding the house. It’s located near Malioboro Street and pretty much close with shops, minimart, and restaurants. I arrived around 11-ish AM just before lunch time. I knocked the door and it’s the host who greeted me in person. Her name is Silva. She and her mom run the place, although they actually live in another house quite far for this one, they always stay at Benetta House when there’s a guest staying in. She introduced me to her mom, both are local from Yogyakarta and I must tell you that they both were great hosts.

When I arrived, the room wasn’t ready yet. It’s still being occupied by other guests. To my surprise, Silva actually put me in the private room for my stay instead of the bunk bed that I booked. She told me that there was a group of teenager that also stayed in the bunk bed room and she thought it could be awkward for me to stay with them (hahahaha) and so they arranged for me to stay in the private room. Even though I would be OK staying with the group, I did really appreciate the nice gesture from Silva. I could use a little bit of privacy for sure. 😎

It was hot that day and I thought rather than only dropping my bag there and go around the city, it’s would be nice to take some time and just relaxing inside the house. So I sit down on one of the chair they have in the living room and started talking with Silva and her mom. I was grateful that I had such a nice host to talk to. Some other people that do the similar thing like Silva and her mom do with their house mostly just be there to greet us in the first place and then leave us alone, some even don’t bother to show up and just ask one of their employee to take care of us. I prefer to have a host that actually stay long to meet us and to get to know us. I mean, the whole point of renting your house and me staying there is to get to know each others and maybe get some stories and tips about the city, yes? I ended up talking with them about an hour or so before their previous guest came in to the house after doing some shopping before checking out. Afraid that I might get in their way around the house (they needed to pack their things and Silva need to prepare the room as well), I decided to head out to buy some snacks for souvenirs.

Since I didn’t really have anywhere to go to on the last day, I just went back to the house after I bought the snacks. Funny thing was that the Gojek driver that I hired actually knew about Silva and her house. He was asking me whether I was a tourist or actually live in that alley (bit creepy yes? Hahaha. But I’m sure he was just being friendly), and I told him that I only here for holiday and I stayed at one of the houses. Then he immediately asked, “Oh, is it Mrs Maria house?”. I was a bit confused and told him that he’s wrong and the host name was Silva and not Maria. Well you know what, he told me that he’s right and that was actually my host’s full name. Turned out my host was famous. Hahaha. The Gojek driver told me that he often got his client from the house and it’s never empty. Wew! 😀

Once I got back to the house, the previous guest were still in the house having their lunch prepared by Silva’s mom. She offered me some too but I politely refused since I was already planning to eat elsewhere. Though it was nice knowing how kind they were to their guests. And I ended up talking with her mom and the guests which was two sisters from Malaysia. Exactly why I love staying in a hostel or a local house, we can get to know other people from different cities or countries or even the locals.

Not long after that, my room was ready and the sisters checked out from the house. After the house was a bit empty, I got to explore the house. It was an old house, if I wasn’t mistaken it was built in the 20s or 40s? I can’t remember. You could say the house was pretty traditional and yet, it’s really homey. The house was colorful. Almost every sections of the house had a yellow accent to it. I asked Silva if Yellow is her favorite color and she said not really. It’s just back then when they painted the house, the mood was yellow, so they went with yellow

There were two rooms with bunk beds and one private room with double bed. All the guests room were downstairs and Silva and her mom live upstairs. The house also came with two bathroom which was nice so you don’t have to fight with other guests hahaha. They also have free wifi throughout the house and it’s just a few steps from the big road so it would be easy for you to find a transportation.

It was a small house but felt really comfortable and since I actually live in the same kind of house in Jakarta, it felt like home to me. 🙂 I  mean, the whole time I was there, I was treated like a family of their own. They even helped me out big time. I was just came back from dinner and when I entered the house, both Silva and her mom were watching TV in the living room. I explained to them that I need to send some stuff to a friend of mine in the city. They immediately searched for the easiest way to send the package or the nearest delivery agent/post office that were still open. It didn’t take that long for them to find the nearest post office and gave me the direction. I went immediately and it only took me 10 minutes and I already back in the house. The host to the rescue! 😀 After that I joined them in the living room and we talked for hours until midnight.

Since I had an early flight tomorrow morning, I excused myself to my room. But then I was thinking how I supposed to check out tomorrow since it’s going to be on a super early morning. I felt bad for them to wake up that early. I was planning to just leave the keys on the dining table. But hey, when I woke up in the morning, her mom was there. She’s actually about to prepare the breakfast for the other group. So yeah, if you’re staying in Benetta House, you got to taste a home-cooked meal made by Silva’s mom. It’s sad that I didn’t get the chance to taste them but the review I read from all previous guests said that it was really good. Damn. I really missed out big time! Oh well, I got an early flight to catch anyway. Nothing I could do about it. But, when I was about to check out, her mom gave me a plastic bag with a canned orange juice and a bread. I mean… for real? They did ask me what I want for breakfast before I came to Yogyakarta so they can prepare, but I told them that I have an early flight so I might not have the time to have breakfast. So I wasn’t expecting anything from them, but they still did prepare a simple one for me anyway. It was really nice of them and I did enjoy the bread and the juice on my way to the airport. ❤

I must say that it was the best experience I’ve ever had with Airbnb houses and both of them were the best host you can possibly hope for. Not to mention that the bed was really comfortable. The only downs I had during my stay in Benetta House was that I only booked for one night. I should have booked for more!

Well, if you come to Yogyakarta, Indonesia, and feel like bonding with the locals and live in an house that will welcome you like a family, Benetta House would be the best choice for you. 😀

Thank you Silva and your mom for the hospitality! I will definitely go back to your house for my next visit. You can count on it.

4 thoughts on “Benetta House, a place called home in Yogyakarta.”

Nice to meet ya! 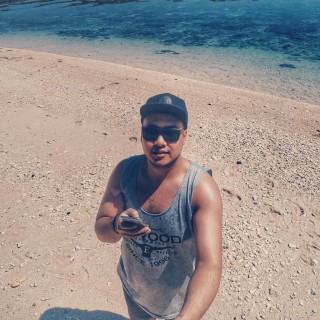 A Proud Member of…. Road to the universe

Words I Can Relate to…

"Sometimes people write the things that they can not say..."

"There are things for all of us, that even all the time in this world wont be able to erase."

"The future is not just something that happens. Its a brutal force, with a great sense of humor that steamroll you if you are not watching."